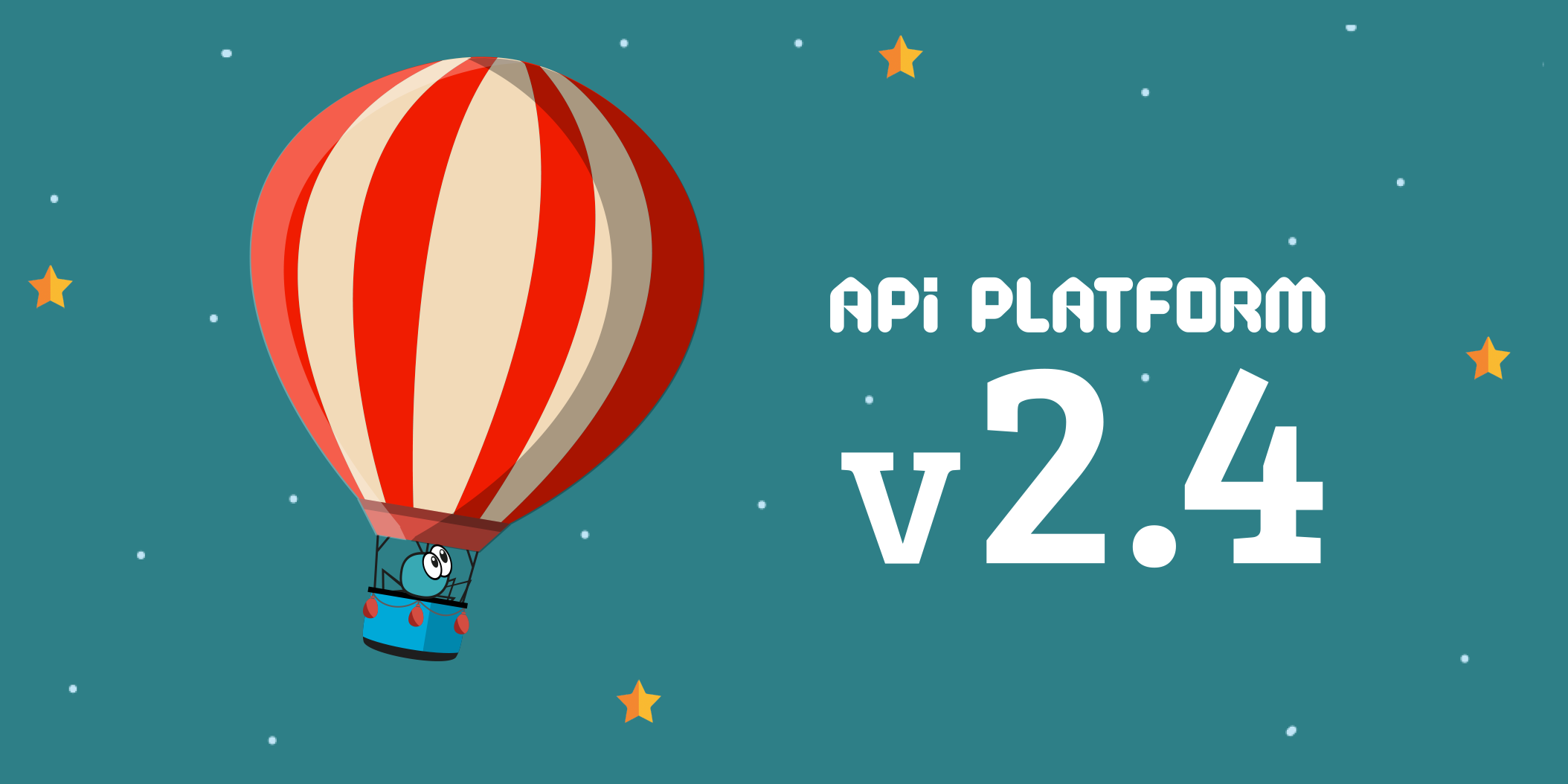 I’m pleased to announce the immediate availability of API Platform 2.4 ! This new version is a huge one, that comes with a large set of new features.

For newcomers, API Platform is a full-stack framework to develop in a breath high quality API-driven projects. Among other (lower level) libraries, API Platform provides:

To create your initial project, you just have to describe the public structures of the data to expose through the API. API Platform will take care of exposing the web API and bootstrapping the clients to consume it: get started with API Platform.

The full changelog is available on GitHub.

Let’s dive into these new features!

MongoDB is one of the most popular NoSQL database. Native support for MongoDB was the most requested, and the most awaited API Platform feature! Sam Van der Borght started the work in March 2016. In July 2017 the Pull Request has been ported to API Platform v2 by Pablo Godinez helped by Hamza Amrouche (API Platform Core Team), Alexandre Delplace and others. Finally, since August 2018 Alan Poulain (API Platform Core Team and author of the GraphQL subsystem) produced a huge effort to finish and polish the patch.

With 114 commits and 234 files changed over almost 3 years. This is one of the biggest contributions to the project.

The MongoDB integration relies on Doctrine MongoDB ODM 2.0 (currently in beta). To enable this feature, just install and configure DoctrineMongoDBBundle. API Platform will autodetect it. Then, create a class mapped with MongoDB, and mark it as an API resource:

The support for MongoDB leverages the flexibility of API Platform: it has been implemented as a data provider and a data persister. Relations, pagination as well as boolean, date, numeric, order, range and search filters are also supported!

A big thanks to all contributors of this amazing feature, and to Andreas Braun, the maintainer of Doctrine MongoDB ODM, for the in-depth reviews!

Elasticsearch is another very popular open-source data store. It allows to perform full-text searches and advanced analyzes on very large datasets. Orange has sponsored the development of an Elasticsearch data provider for API Platform, as well as some interesting search filters. The implementation has been realized by Baptiste Meyer (API Platform Core Team). Thanks to Orange, this feature is now available for everybody in API Platform 2.4.

To enable and configure the Elasticsearch support, refer to the official documentation. Then, a simple resource class corresponding to an Elasticsearch index is enough to benefit from the full power of API Platform:

Then, you can use an URL such as /tweets?message=foo to search using Elasticsearch.

Keep in mind that it’s your responsibility to populate your Elastic index. To do so, you can use Logstash, a custom data persister or any other mechanism that fits for your project (such as an ETL).

Baptiste also took this opportunity to improve the code handling the pagination. It is now a generic class used by all native data providers (Doctrine ORM, MongoDB and Elasticsearch), that you can reuse in your own.

Mercure is a brand new protocol built on top of HTTP/2 and Server-sent Events (SSE). It’s a modern and high-level alternative to WebSocket (WebSocket is not compatible with HTTP/2). Mercure is especially useful to publish updates of resources served through web APIs in real time. It is natively supported by modern browsers (no required library nor SDK) and is very useful to update reactive web and mobile apps.

In version 2.4, I added Mercure support to the server component of API Platform and to the React and React Native app generators. The Docker Compose setup provided with API Platform has also been updated to provide a Mercure hub.

Configuring the framework to automatically dispatch updates to the currently connected clients is straightforward:

Thanks to the auto-discoverability capabilities of Mercure, the generated clients will automatically subscribe to updates, and render them when received:

Messenger is a new Symfony component created by Samuel Roze (Symfony and API Platform Core Team). It allows to dispatch messages using message queues (RabbitMQ, Kafka, Amazon SQS, Google PubSub…) and to handle them asynchronously. It provides a message bus that is very useful to implement the CQRS design pattern.

In API Platform 2.4, I added a convenient way to leverage the capabilities of Messenger. This new feature is particularly useful to create service-oriented (RPC-like) endpoints:

Thanks to the new messenger attribute, this object will automatically be dispatched to the bus. It can then be handled (synchronously or asynchronously) by a message handler:

That’s all you need to use Messenger!

HTTP/2 allows a server to pre-emptively send (or “push”) responses (along with corresponding “promised” requests) to a client in association with a previous client-initiated request. This can be useful when the server knows the client will need to have those responses available in order to fully process the response to the original request.

This is capability is especially useful for REST APIs performance: it allows the server to instantly push the relations of the current resource that will be needed by the client, even before the client knows that it will have to issue an extra HTTP request.

Thanks to the push attribute, if the client asks for /books/1 the web server will directly send both the requested book resource and the related author (e.g. /authors/12) to the client.

For best performance, this feature should be used in conjunction with the built-in HTTP cache invalidation system (based on Varnish).

Jean-François Thuillier and Arnaud Oisel patched API Platform Admin and the underlying API Doc Parser JavaScript library to automatically detect and use filters exposed by the API spec (Hydra or OpenAPI). A video is worth thousand words:

The only code that you need to get such UI is the following:

The UI is built client-side dynamically by parsing the API spec. Awesome isn’t it?

Jean-François also added some convenient helpers to help customizing the admin, and Laury Sorriaux fixed a long standing limitation: it’s now possible to use the admin even with API not served at the root of the domain (such as /api).

Read and improve the docs of API Platform Admin.

To retrieve the OpenAPI specification of the API in version, use the following url: /docs.json?spec_version=3.

You can also dump the specification in JSON or in YAML format:

Also, in addition to Swagger UI, we added support for ReDoc, a beautiful, human-readable, API docs generator written in React:

Handling Data Transfer Objects was known to be difficult with API Platform. Back in October, the API Platform and the Sylius teams worked together to improve the API of the popular e-commerce solution… using API Platform (stay tuned!). During this workshop Antoine Bluchet and I worked on a new way to handle DTOs with API Platform:

The new input and output attributes allow to use specific classes respectively for the writeable and the readable representation of the resource.

As demonstrated in the example using Symfony Messenger, it’s also possible to set these new attributes to false to hint that the operation will take no inputs or no outputs.

These new attributes are automatically taken into account by all API Platform subsystems, including GraphQL, Hydra and OpenAPI.

A convenient way has been to configure the HTTP cache per resource has been added by Daniel West:

The Sunset HTTP response header field indicates that a URI is likely to become unresponsive at a specified point in the future.

This header plays well with the deprecation mechanism available since API Platform 2.3. Thanks to a nice contribution of Thomas Blank, it’s now easy to set this header using API Platform:

Read and improve the documentation related to API evolution.

API Platform 2.4 is shipped with an improved version of the React and Vue.js client generators:

API Platform 2.4 is available for download on GitHub. While you are here, if you like the project, help us making it popular by starring it on GitHub!